Posted on 10 December 2012 by lkonieczny

OK, i have invented a new dish, a new food. But I need a name for it. I’ll tell you what’s in it and how I did it, but I need you to help me name it. Here’s a picture of two of them, cut in half: 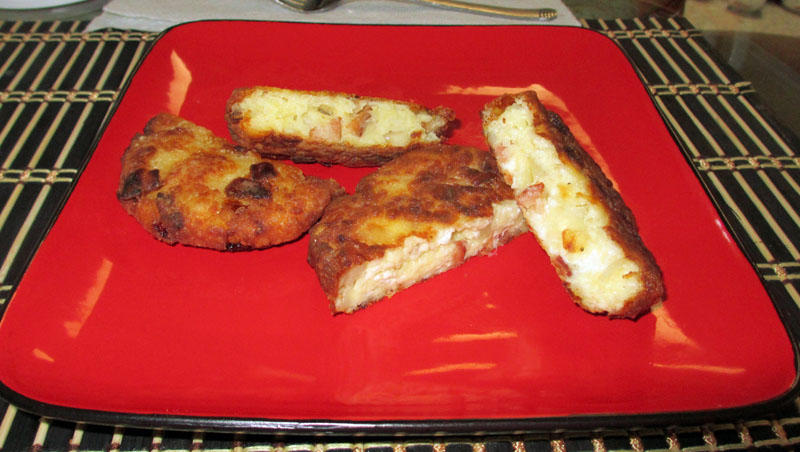 I was faced with some leftovers from my Pierogi Party:

So, I considered what I could make and I came up with the following:

Or maybe I’ll call them pierogatkes.  Or maybe Latkierogi…. well, you can help me out here. What should I call them?

Here’s what i did.

In a separate pan, i put some flour with salt and pepper. Then I used a greased round cookie cutter to form the potato mixture into rounds, much like a hamburger. I put this into the round and evened it out, then put into the flour mixture. I let these sit a bit, then later gave them a second dip in the flour mixture.

Finally, i headed about 3/8 inch of vegetable oil in a skillet until about 375 degrees, then added the little rounds of love. I fried them until nice and brown, then turned them. When they were done on both sides, I drained on a paper towel and served with sour cream.

“How were they?” you may ask. Well, they were outstanding! I’d make them again in a second. Now, next time I think I’d actually put them in an egg wash after the first flour bath, then flour again. But they were awesome. Hot. Tasty. Kind of like a pierogi potato pancake. The bacon and onion made them very savory and the sour cream added a nice touch.

This entry was posted in food. Bookmark the permalink.

1 Response to Name that Dish!